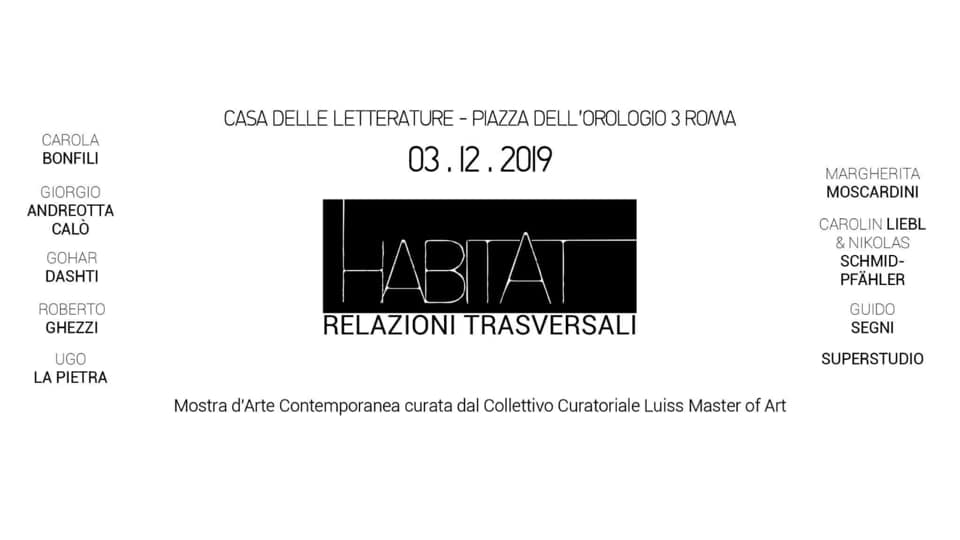 The Curatorial Collective, composed of the students of the IX edition of the Luiss Master of Art, University Master’s Degree of the Luiss Business School, under the scientific supervision of Achille Bonito Oliva, presents

an exhibition that reflects on the theme of the contemporary habitat in relation to artistic practice. From 3 December 2019 to 14 January 2020 in the spaces of the Casa delle Letterature, in piazza dell’Orologio 3 in Rome. The concept of Habitat is represented by the works of artists of different generations and languages ​​through three declinations of the theme: Natural, Urban, Virtual. The works of Giorgio Andreotta Calò, Gohar Dashti and Roberto Ghezzi reflect the natural habitat. The urban one, Ugo La Pietra, Margherita Moscardini and Superstudio. The virtual habitat Carola Bonfili, Carolin Liebl with Nikolas Schmid-Pfähler and Guido Segni. Painting, sculpture, photography, video and installations are located in the internal and external spaces of the prestigious Borromini complex of the Casa delle Letterature.

Also on display are the works of Giulia Berra, Maria Di Stefano and Elena Mazzi, finalists of the IV edition of the International Generation Contemporary Prize set up by the Luiss Business School to promote Italian and foreign contemporary art, support artists under 35 and give life to the collection permanent school of contemporary art. During the inauguration, the winner chosen by a jury chaired by Achille Bonito Oliva will be announced. The Curatorial Collective has completed all the design and organizational steps of the exhibition, from the concept to the choice of the artists, from the preparations to the communication, up to the preparation of a catalog. The volume is divided into four installments that retrace and expand the contents of the exhibition, emphasizing the theoretical division into Natural, Urban and Virtual. “Habitat is an active state. A mechanism of functioning of things, which must be dynamic in order to evolve. Like the man. On closer inspection, the human species is the only one able to create endogenous conditions that facilitate life in a certain place, and at the same time, to adapt to the allogeneic conditions that it is faced with: humanity not only adapts to the habitat in which it is located, but modifies it to make it more functional. This develops as a dense network of interconnections of different nature that, by interpenetrating, influence and feed each other. Transversal relationships that touch multiple levels of existence: Natural, Urban, Virtual. In translation into the language of contemporary art, these three ramifications want to highlight how these different but complementary habitats are dispensers of aesthetic implications and can play an active role in the definition of the work of art “. The choice of exhibition space is also consistent with the complexity of the theme. The Casa delle Letterature of Rome Capital, directed by Maria Ida Gaeta, is one of the most important centers of interaction between literatures, arts and languages ​​of cultural communication. The exhibition will be accompanied, during its duration, by a cycle of three lectures with the aim of investigating the theme of the habitat with an interdisciplinary approach: