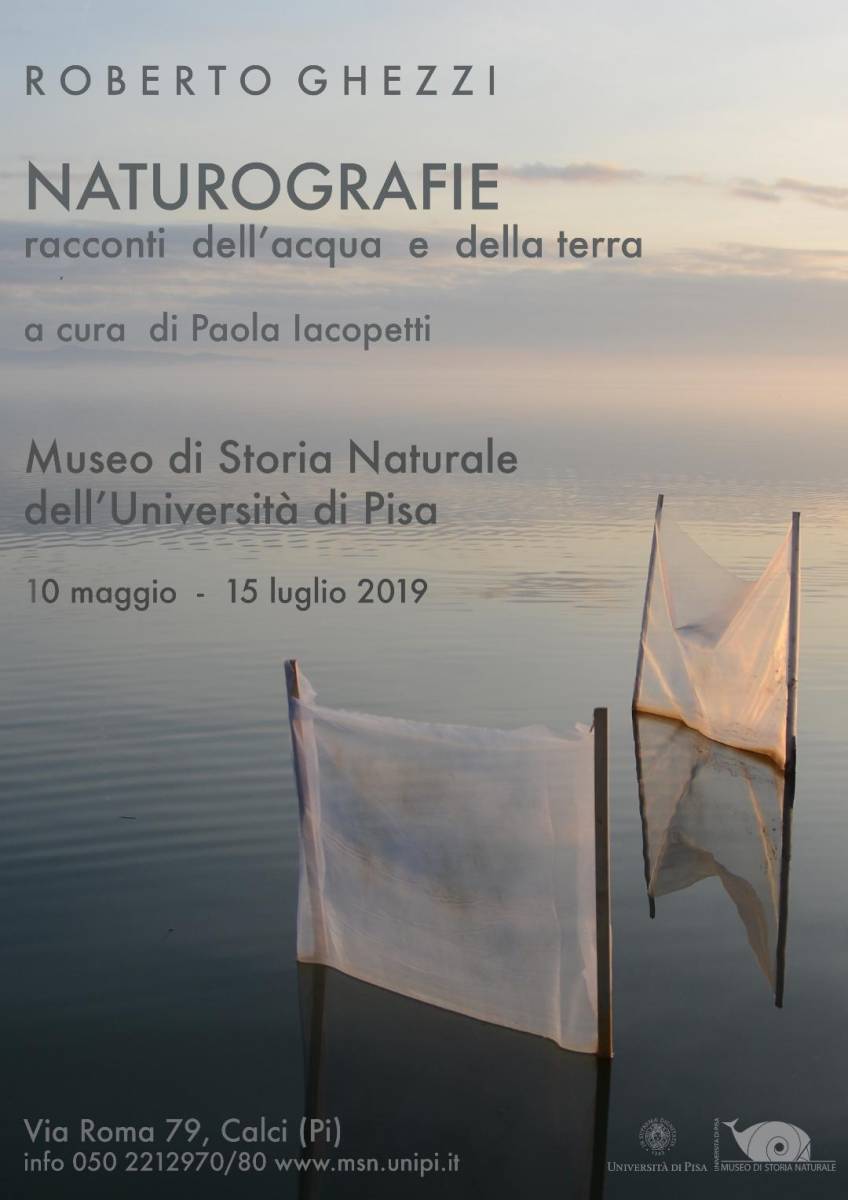 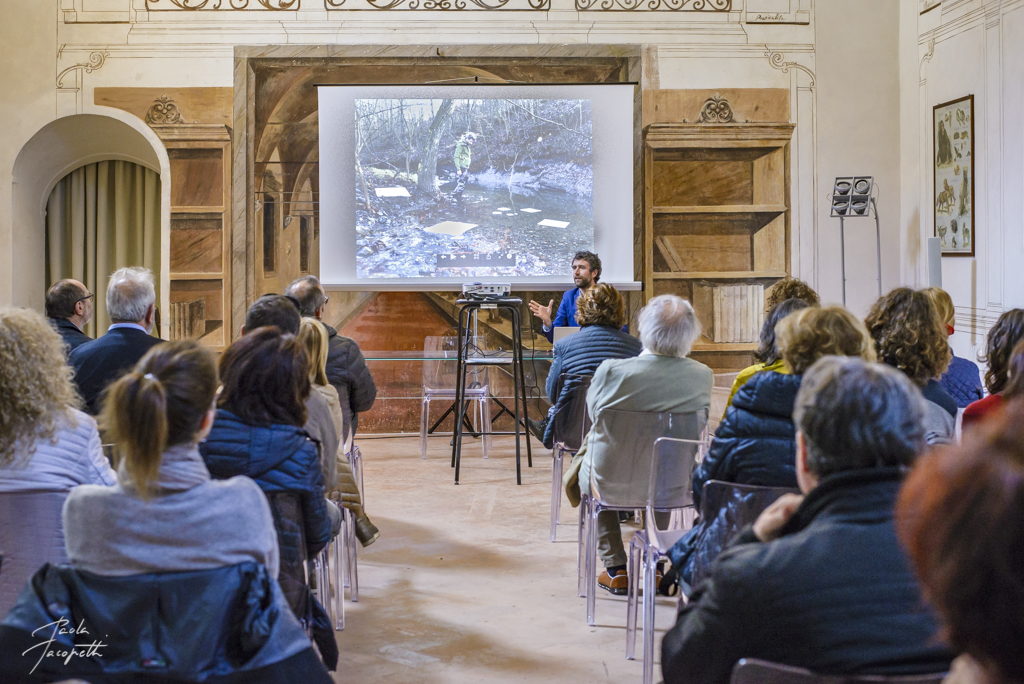 From 10 May to 15 July 2019 Roberto Ghezzi will hold a personal exhibition at the Cetacean Gallery of the Natural History Museum of the University of Pisa, exhibiting his naturographs, works created through nature in wild places of Italy and the world.

Ghezzi’s installations are in principle white canvases prepared with secret reagents that, let live for months or years in uncontaminated natural environments, develop a slow and deep dialogue between man and nature; a dialogue and a connection, in this case, which is consolidated over time, day after day, and which witnesses the alternation of the seasons and the elements. The result is a real piece of the “new” world, newly formed, almost “taken away” from the flow of time and crystallized within the installation, which tells the infinite miracle of life on this beautiful planet and which, for once at least, it gives the artist the feeling, even if it is illusory, of having really created.

The inauguration of the exhibition, with free admission, will be held on Friday 10 May at 17.00.

The exhibition “Naturographies. Stories of water and the earth” by Roberto Ghezzi at the Natural History Museum of the University of Pisa is part of an artistic project in and for the territory of Calci, started on March 9th with the laying of eleven white canvases in the forest devastated by the fire of 24 September 2018.
Ghezzi entrusted them to Nature to collect the signs of fire and rebirth. Before leaving, he told me that naturographs are like children to him: at this moment other canvases are being transformed into different places on the planet and are all present in his thoughts. A confidence that is also an invitation to “visit them” every now and then, leaving them to me and the locals. The comparison guided me to some reflections that I try to share in this paper.

Before starting to build his canvases the Artist dialogues with Nature, whether it is that of a forest or stream near his home or of a remote corner of the planet, from Alaska to South Africa: he travels through the places, studies the climate, the biology, listen to their feelings, connect, meet the locals and collect their stories. Like a bird that is about to build a nest or a mammal that digs its den in which to give birth to its cubs, Ghezzi carefully chooses the place in which to make his creations.
The moment they come out of his studio the canvases are white, apparently “virgin” and similar to each other. In reality they have already received the signature of the author, a secret and articulated recipe that Ghezzi modulates according to the environment to which the canvases are intended and diversifies between one canvas and another. Each of them is therefore unique, in terms of characteristics and potential, right from the first moment of its genesis, just like a child. Go back to the earth and walk away from it, let Nature let it “grow”, transform.
If you can go and visit them, look at their changes anxiously without interfering.
It cannot predict or even determine the final appearance of the creations; how much rain will bathe them, which organisms and microorganisms will find nourishment or shelter, which and how many sediments will settle there, how much and how the light of the sun will change their color and not even how much time it will be necessary for them to become “big”. But it is he who establishes the moment in which to take them back with him to stop any ongoing process with appropriate treatments. The completed works are then “brought to light” in galleries, museums, private houses, to convey to others the message of the Artist, his legacy.

Ghezzi’s installations in the natural environment sometimes follow the shape of a golden spiral, the link between man and nature: this is the case both for the installation between the charred trunks on the mountain, and for the preparation of the exhibition at the Museum of Natural History. These two spirals have begun to grow, expand, involve people, generate other ideas, strengthen friendships, stimulate artistic collaborations, from the moment they were conceived

I like to think that the concatenation of events, exchanges, human relationships, personal reflections and emotions aroused by Naturographies, are also daughters of this very particular union between Artist and Nature. Also integral part therefore of the work of Art. Which has remote and mysterious origins, as much as its recipients and the questions and emotions it will arouse in different people and eras: just as the golden spiral has neither a beginning nor an end, it follows laws that man investigates from always, but they pre-exist him and, I believe, they will survive him.
Paola Iacopetti 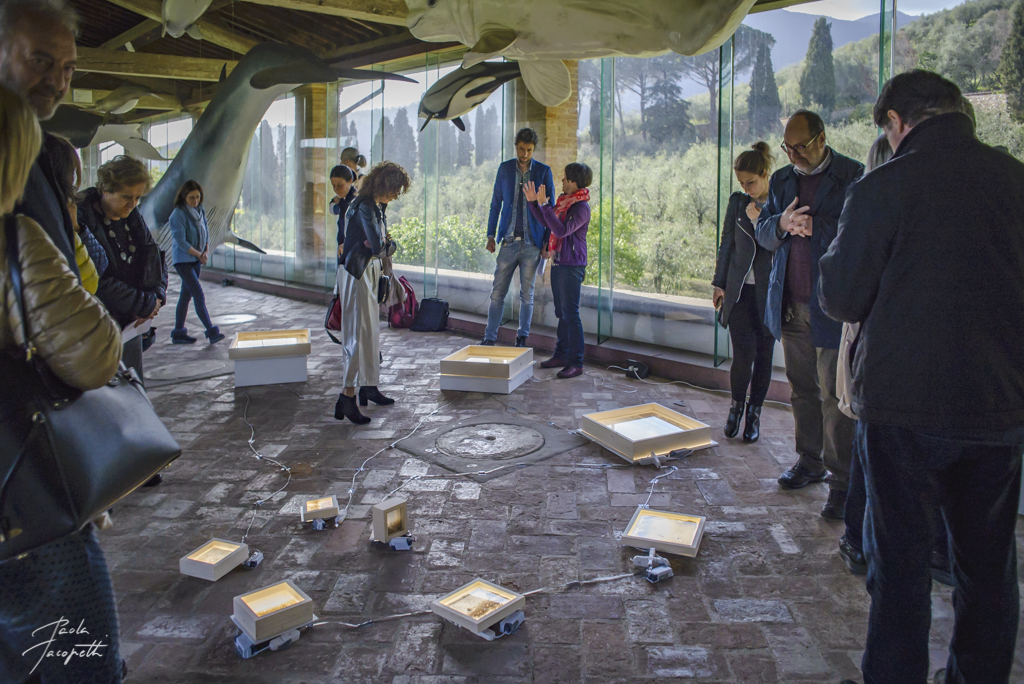 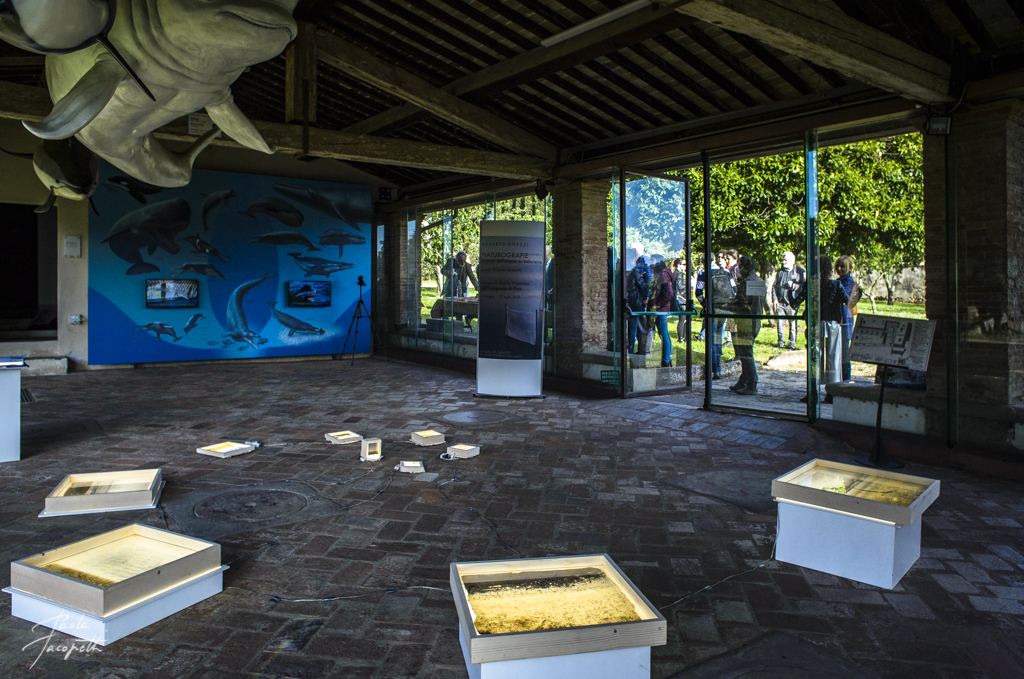 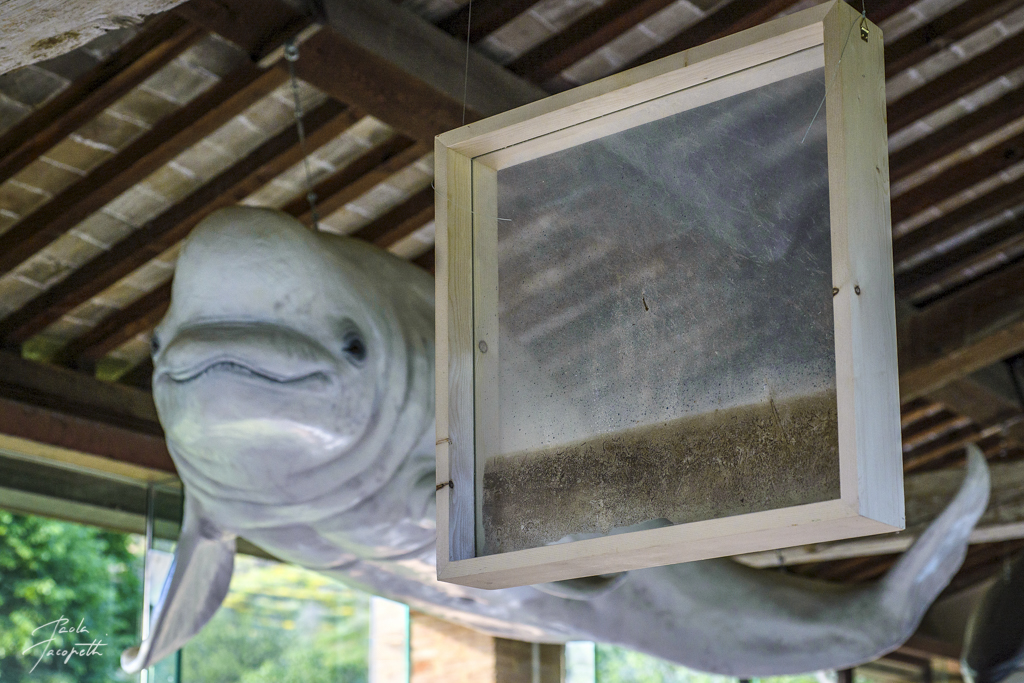 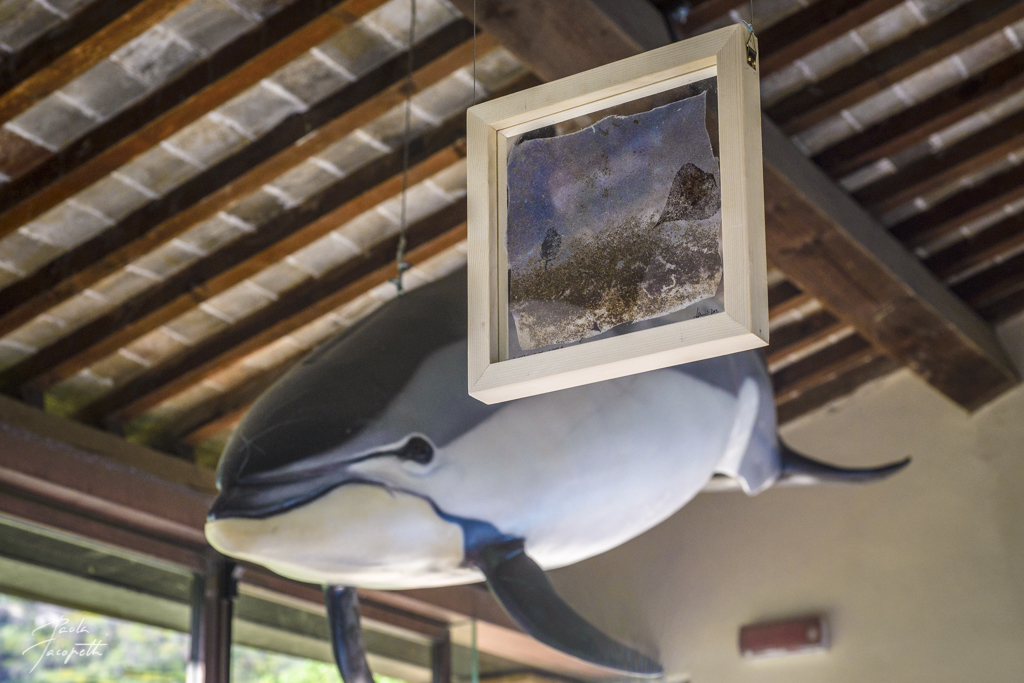 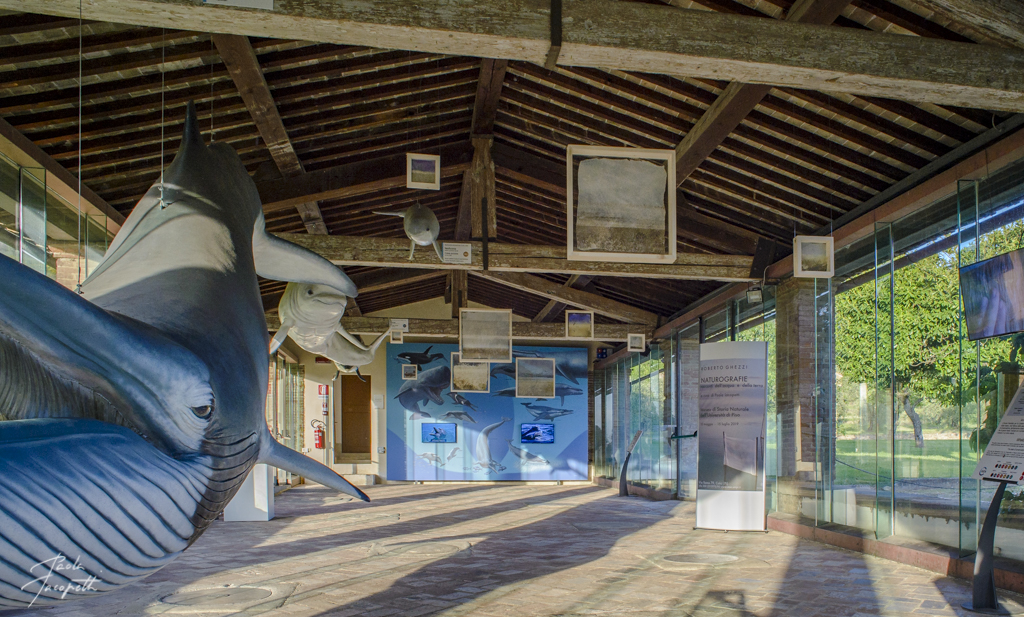 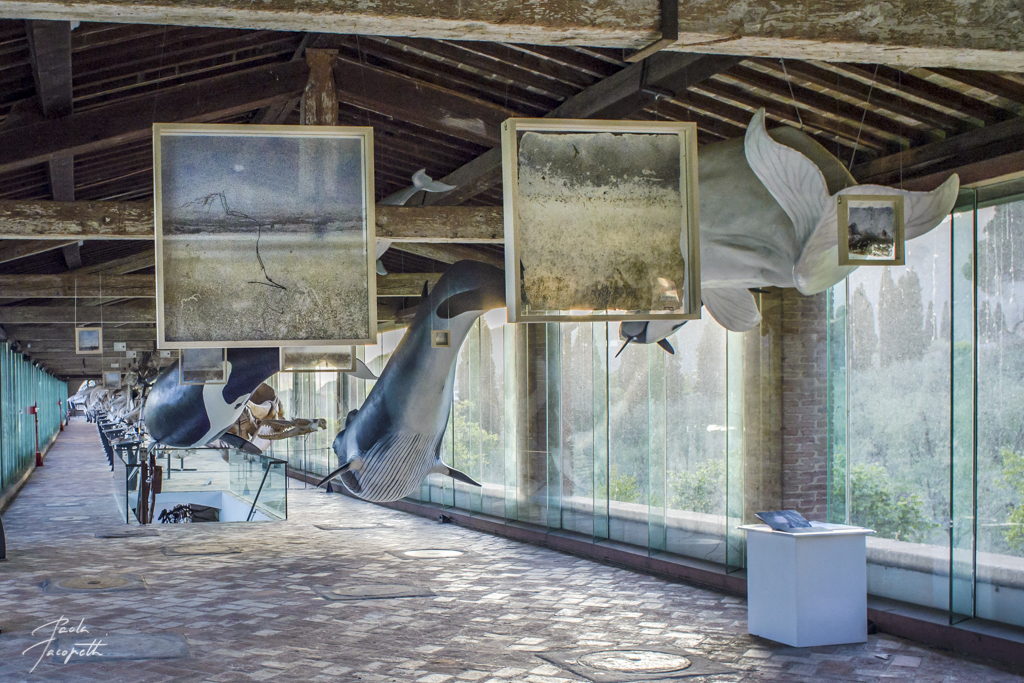