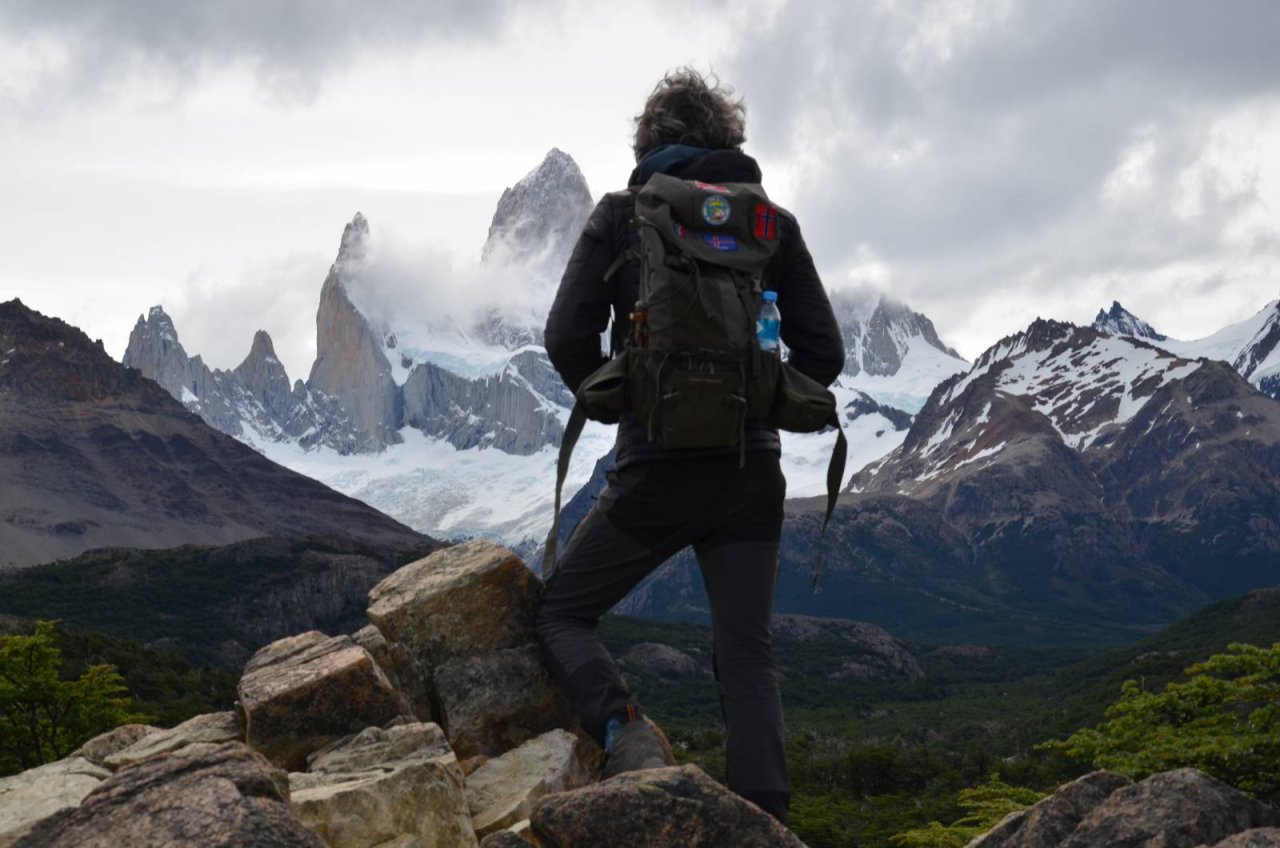 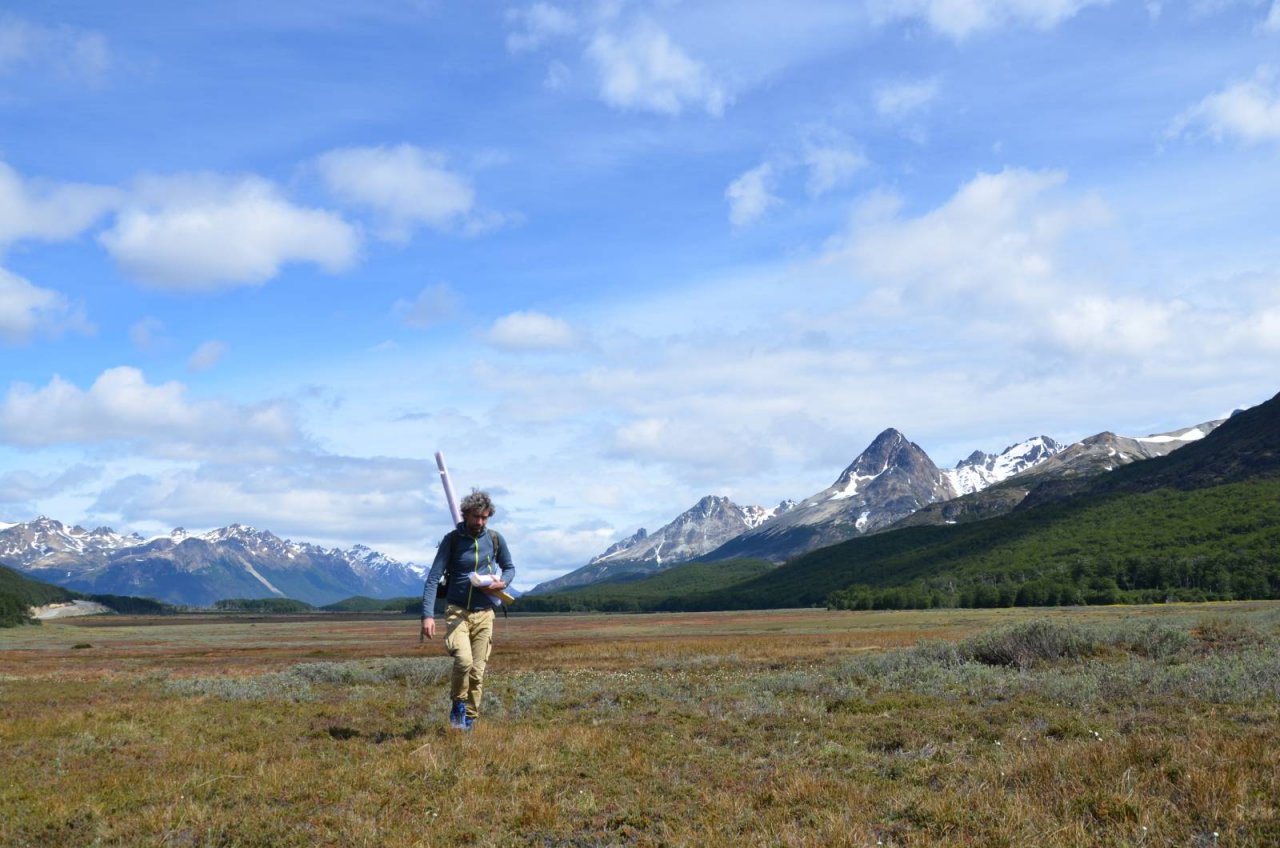 From 19 December 2019 to 6 January 2020 I carried out an artistic research in a natural environment that first brought me to the southernmost part of Argentina, inside Tierra del Fuego, then, going up, to some places in the National Park Los Glaciares, in particular El Calafate and El Chalten.
The intent was to create a series of works, using the naturography technique, of my conception (see www.robertoghezzi.it), where man and nature establish a deep and lasting dialogue within the surface of installed canvases in different natural environments, in addition to collecting information, findings and personal considerations about the relationship between the local population and the environment in these areas.
To this end, I was a guest of the artistic residence L ’Planeta de Origèn, directed by Professor Laura Aguilera Mendieta, who went out of her way to facilitate my research and contact with local institutions.
After exploring some interesting points on the island and drafting the projects, I proceeded to install the crinoline fabrics pulled on wooden poles.
These are the chosen locations:
1) Rio Pipo, assisted by Abel Berna, in one of the characteristic areas of peat bogs that insist numerous in the area near the Tierra del Fuego National Park: 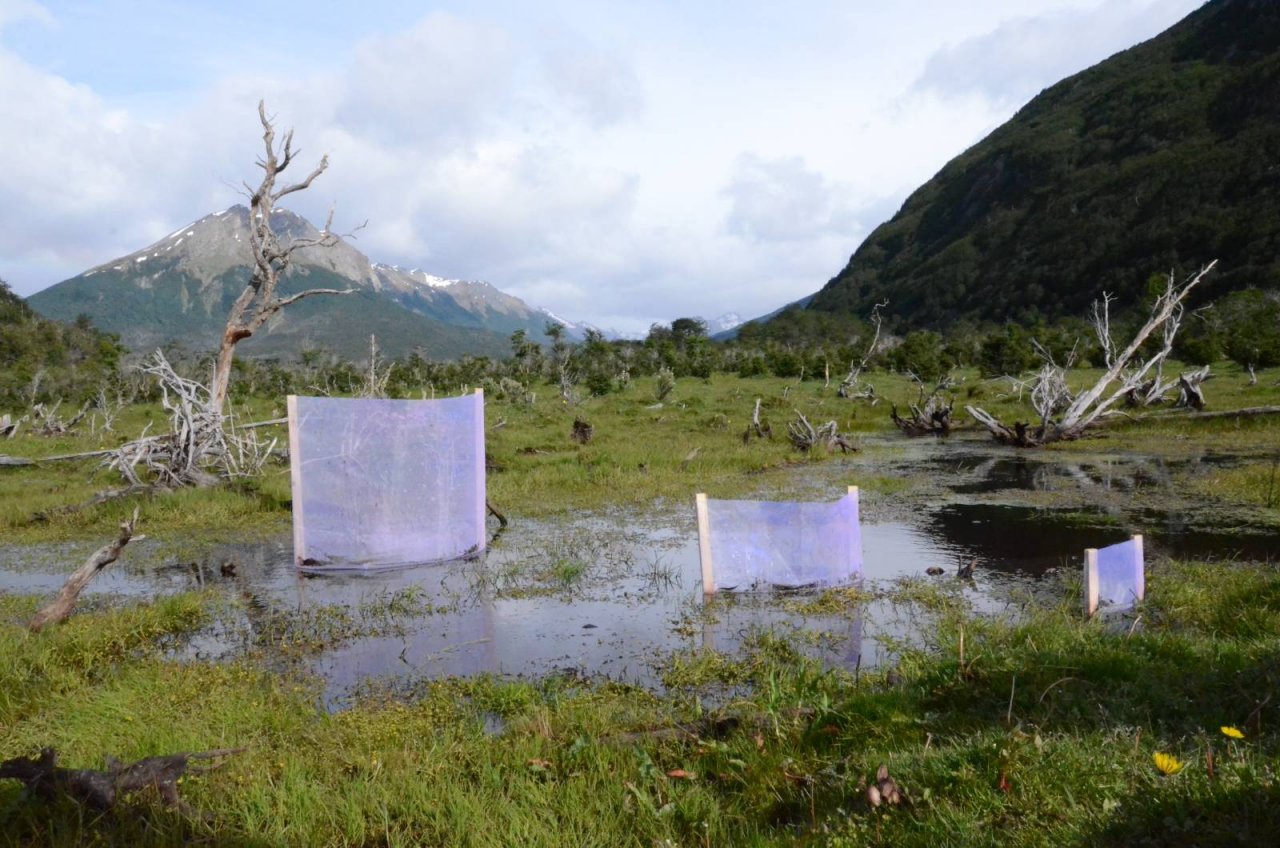 2) In the area called Le tre Lagune, not far from Ushuaia and managed by the local Club Andino, characterized by an uncontaminated and little frequented plateau, immediately under the Martial glacier, sprinkled with peat bogs with incredible colors. 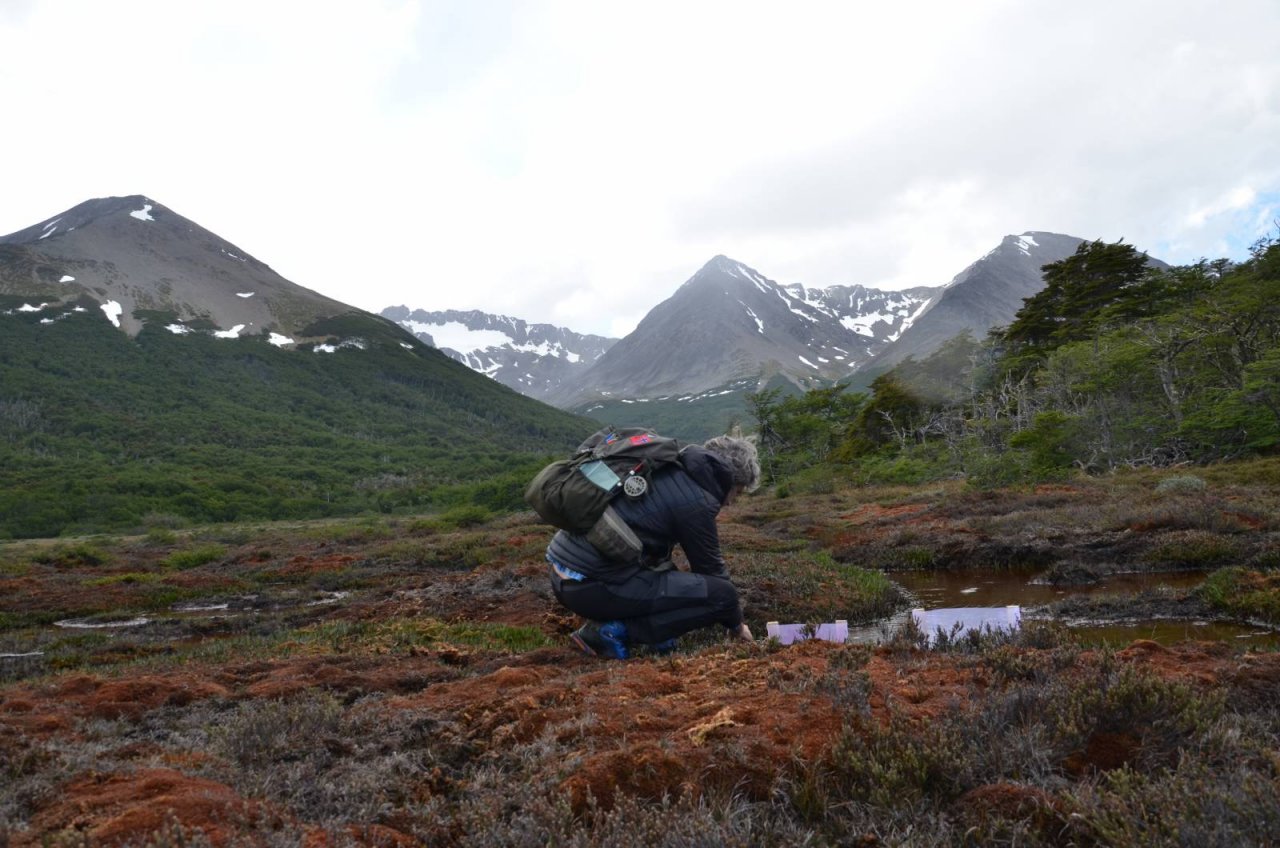 3) At Rio Olivia, at the point where it flows into the Beagle channel, to dialogue with the tidal flows affecting the area: 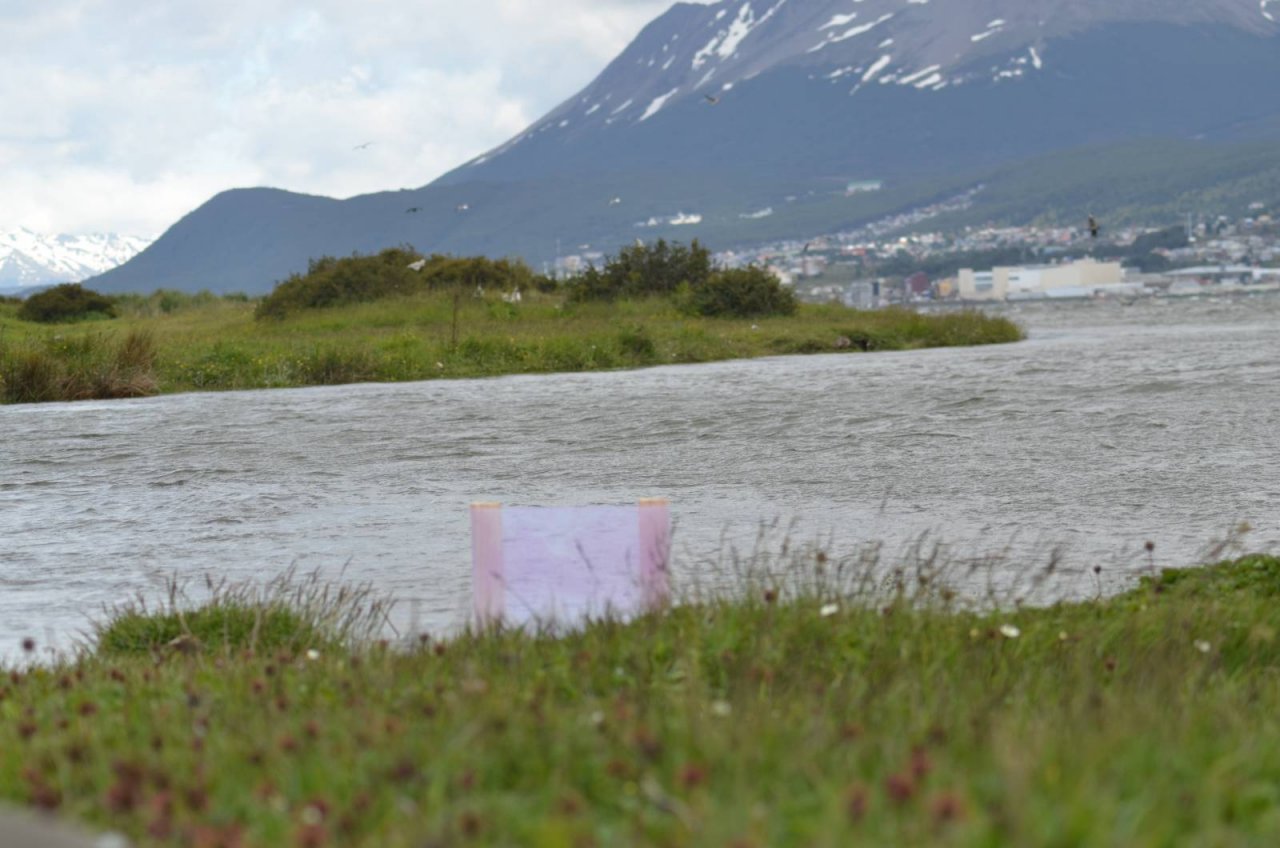 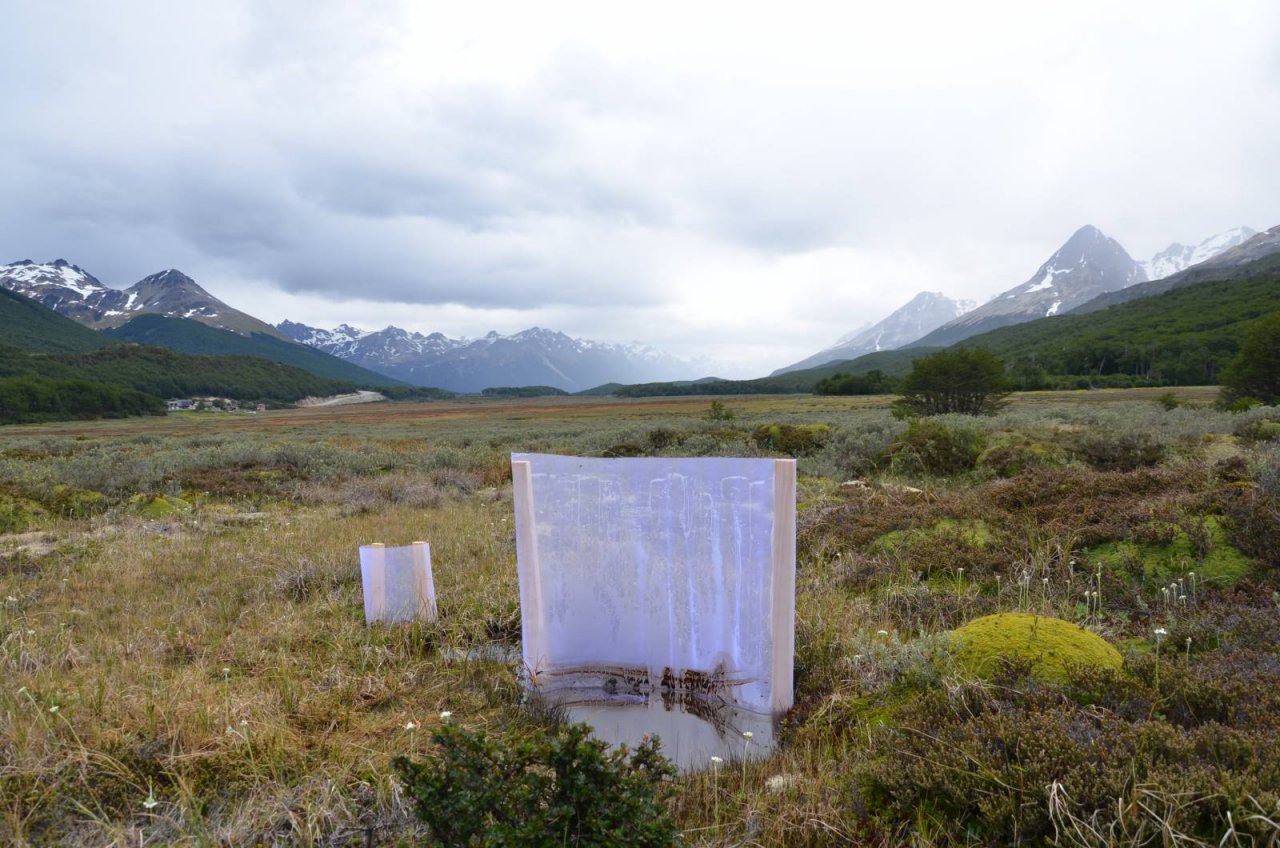 5) At Estancia Harberton, hosted by Abby Goodall on her property, inside one of the dams that the beavers have built in some rivers in the area: 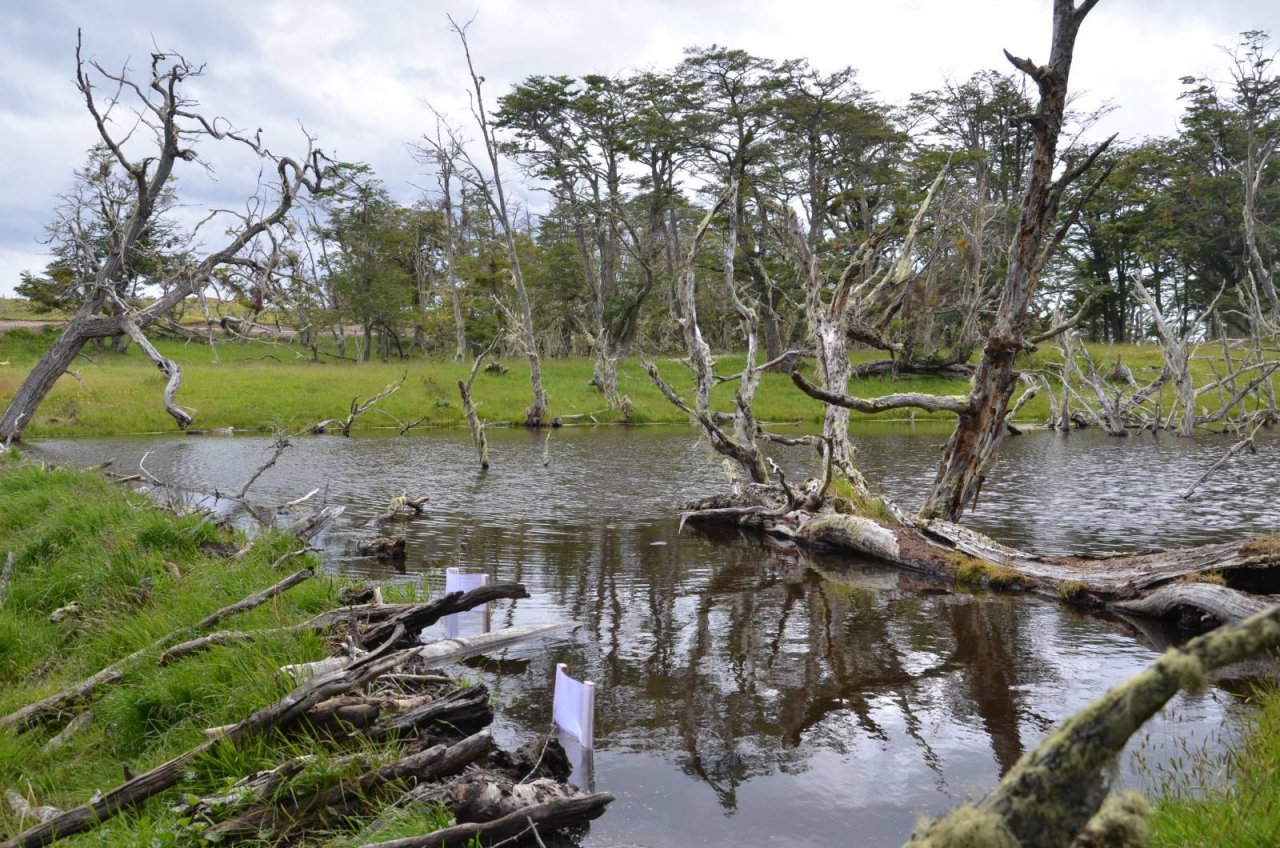 The installations created in this way, built in absolutely natural and biodegradable materials to respect the environment, immediately began to dialogue with the landscape, reacting with water, earth and light.
During my stay in Tierra del Fuego I continued, while waiting for the creation, the monitoring, evaluating the daily increase of the sediments, the reaction of the photo-sensitive compounds on the canvases exposed to the light, and studying the surrounding nature in depth. 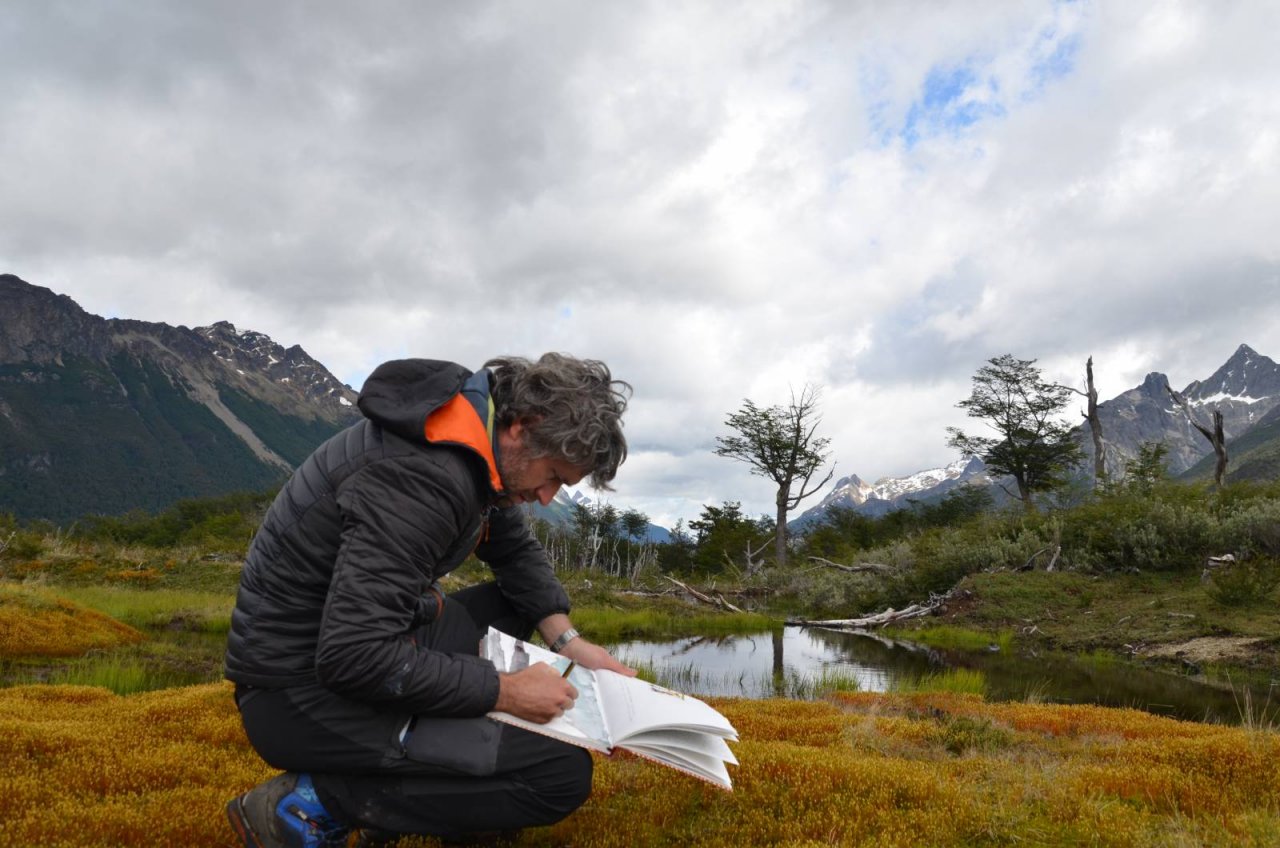 Tierra del Fuego has proven to be a unique place, with species of flora and fauna, such as southern beeches and many bird species, which I could not have found elsewhere. The dialogue with a similar territory has enriched each work with authentic, profound and almost ancestral meanings.
The installed naturographs were taken about 12 days after their installation, leaving each room in the same state in which I had found it.
Sedimentation and photosensitive reactions proved different depending on the places where the canvases had been installed. More specifically, the peat bogs have given the installations different colors depending on the time and place, from red brown to black, reflecting the fact that the interaction between man and the environment, in naturography, is always full of new and interesting artistic aspects and scientific to evaluate. 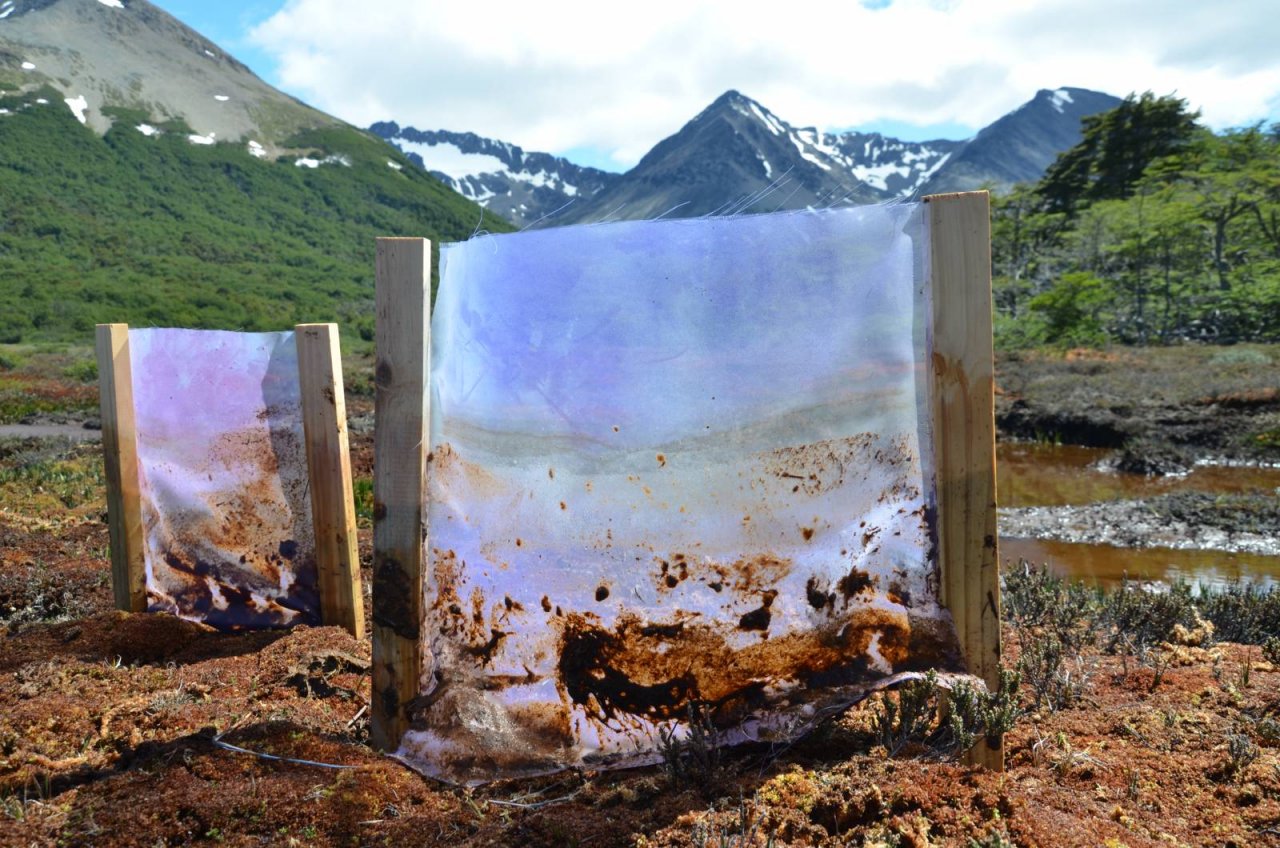 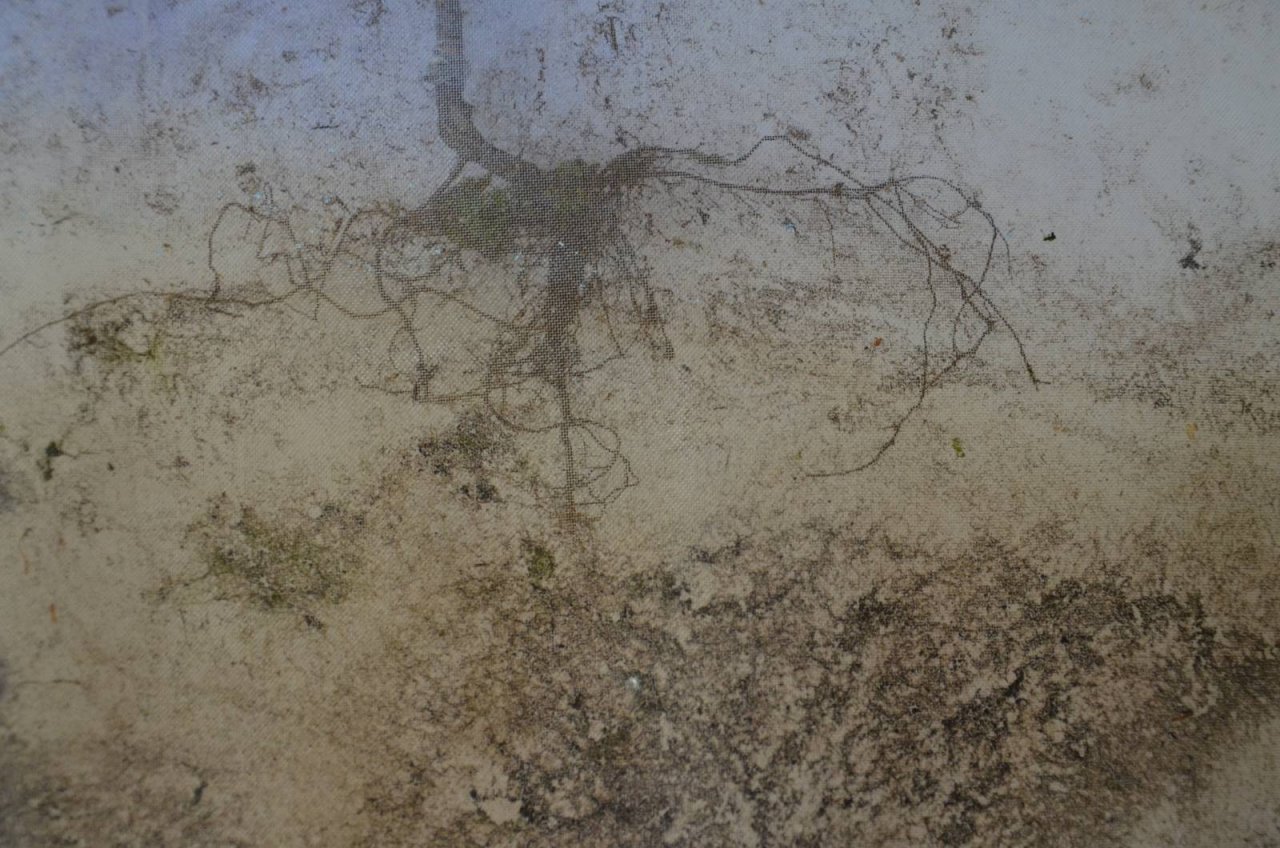 The works thus created were finally exhibited during an exhibition set up at the Museum of the End of the World in Ushuaia curated by Laura Aguilera Mendieta. The participation and interest of the public, tourists, colleagues and simple interested parties has been remarkable. 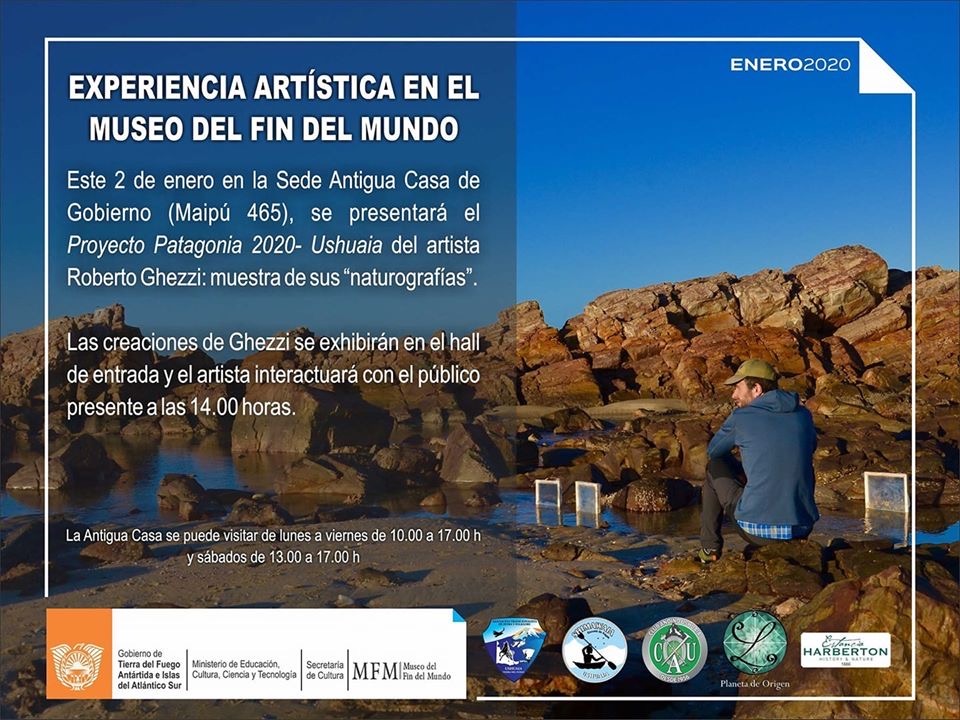 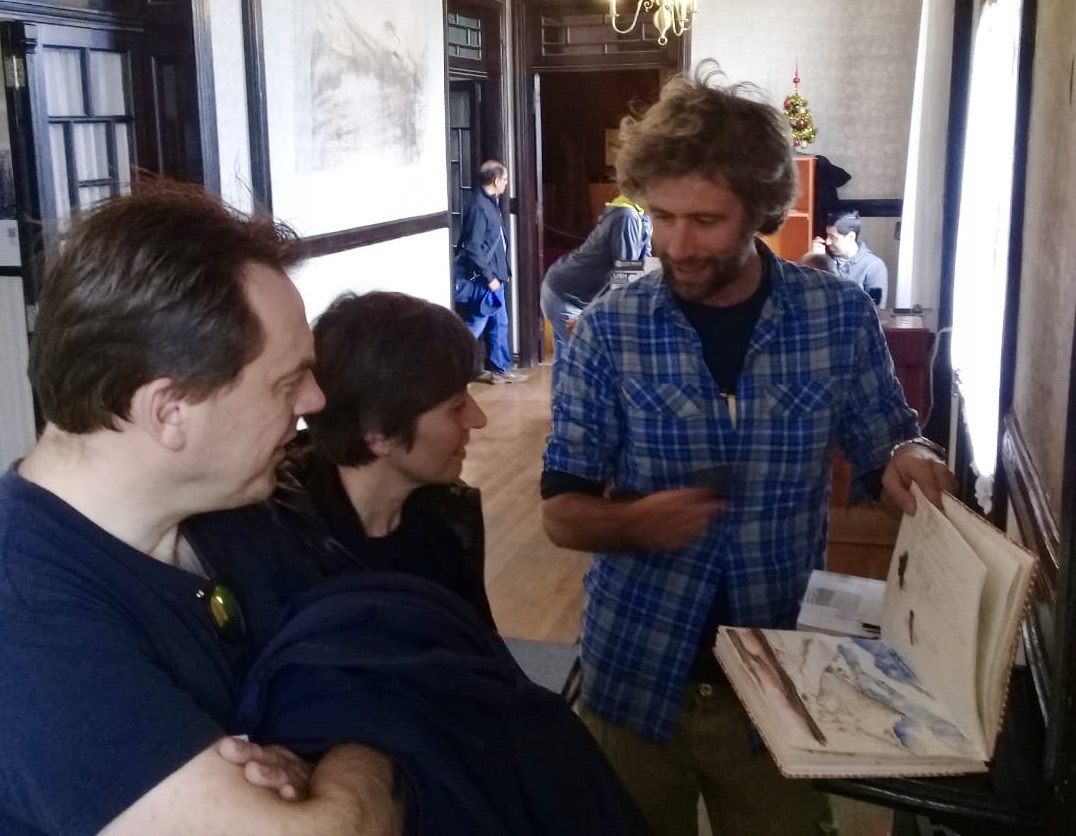 During the second part of the residence I moved to El Calafate, host of the photographer Connie Voncheidt and the painter David Vonscheidt, thanks to which I set up a small exhibition of the works made in Tierra del Fuego at the Regional Museum – Local Municipal, combined with a talk with projection of photos and videos of my research.
As can be seen from the photographs, the event aroused a lot of interest, many of the authorities present and the public. I also carried out an installation in the river that flows near the Museum, still there, left in the care of colleagues from El Calafate. 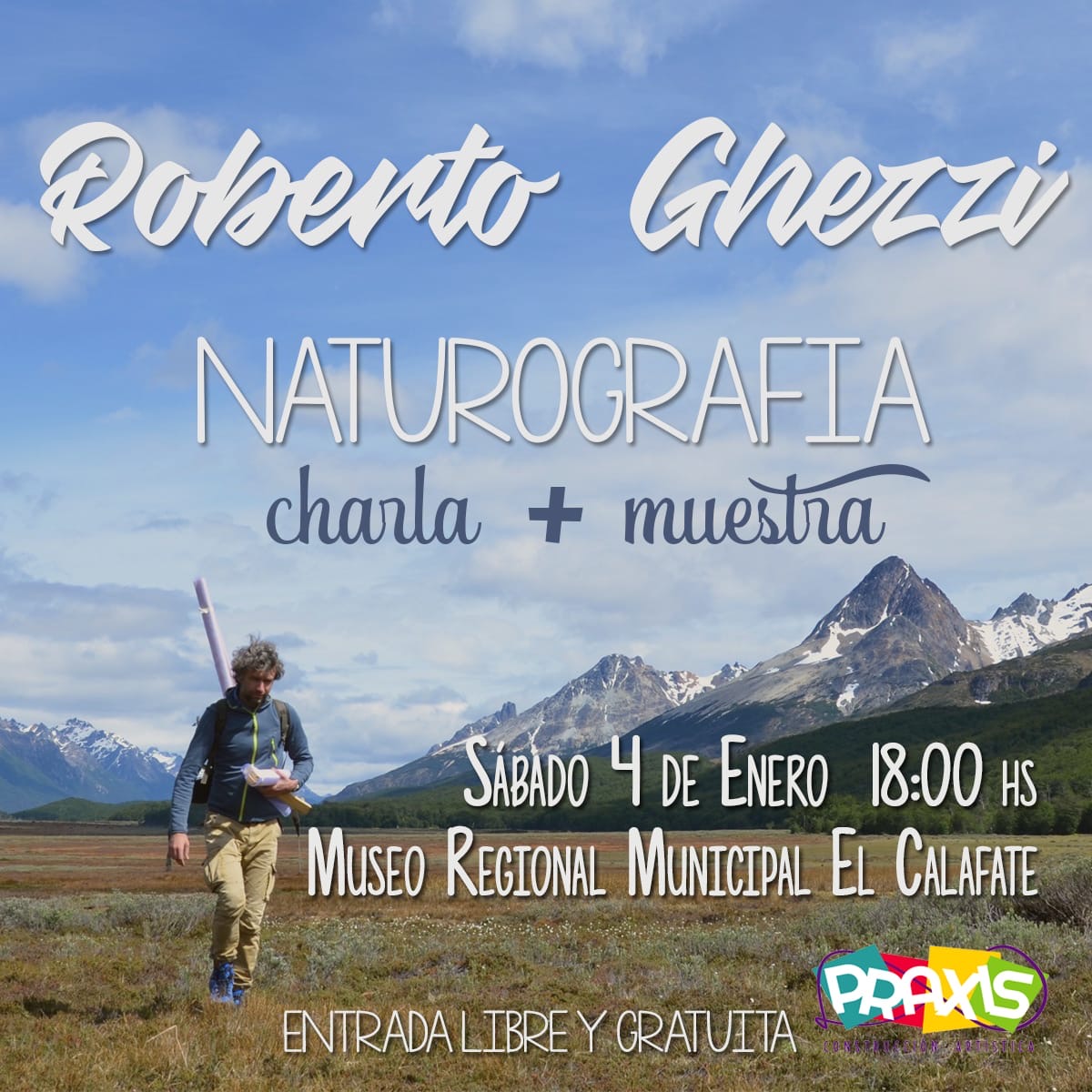 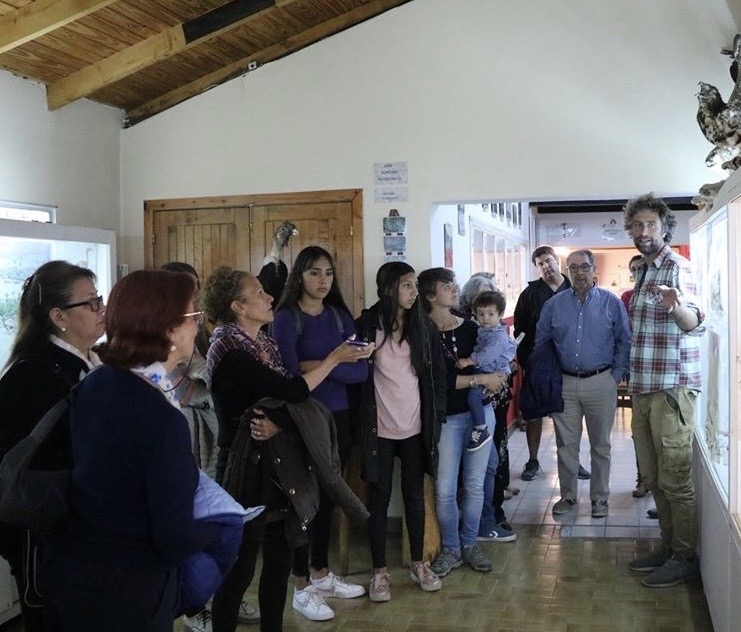 I finally went on to El Chalten, the last stage of my artistic journey, where I left a canvas buried by handing over the coordinates of the place to a mountaineer friend who will go to that area in January 2021, to have a long and complete exposure (365 days ) of a fabric with the patagonic nature.

Ultimately, the Patagonia 19.20 project had an unexpected success, in many ways:
as artistic research, since the dialogue between the installed fabrics and the nature of Tierra del Fuego has been productive and exciting;
as a relationship with the public: because the temporary exhibitions and talks have been very popular and have